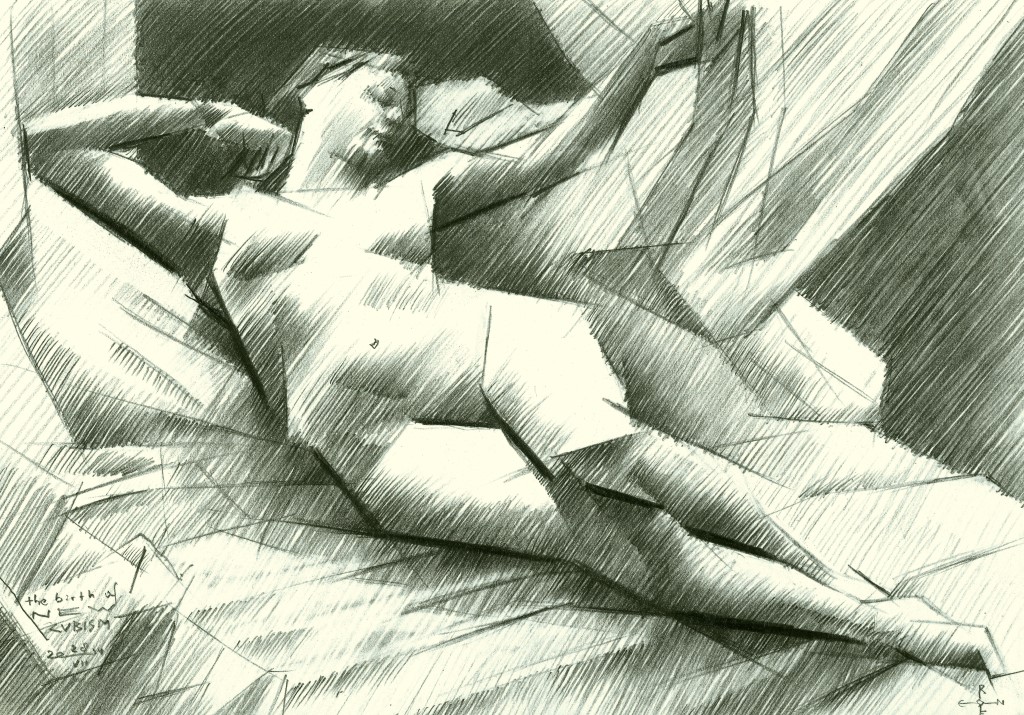 Buy a print of this artwork through ArtPal or Redbubble

This graphite pencil drawing is part of the series I started off with The Birth of New Cubism – 28-04-14. Obviously you can see in this one I still was searching for my interpretation of cubism. It so happened some 10 years back I wanted to beget a style of my own, something I could live in. As a lawyer and in university I was only following the rules and applying them. Something similar I did in art. Already at a young age I could draw realistic portraits and models. Such did not satisfy me in the long run though.

Once I read Jerzy Kosinski’s motto ‘The true meaning of art is not to portray but to evoke’. That set off an alarm bell in my head. Maybe quiting my parttime job as a lawyer played a part in it. Moveover I came to realize that from that moment, as an entrepreneur and fulltime artist, I was the one in charge. All rules were put aside, except for the ones I had to make myself, but how? In my eyes it was only Baron Munchausen who could drag himself out the swamp by pulling himself up by his own hair.

One thing I remembered from The Beatles is that John and Paul were inspired by black music and classic music for example. John also remembered Liverpolean sailor songs while composing his own and Paul borrowed his composition of Blackbird from Bach’s Bourrée in e minor. Talking about my cubism, I admired impressionism and cubism already for a long time. In The Netherlands both styles are to be found in museums in abundance.

Fascinated by Picasso and early cubists in general I did not like their use of multi-perspectivism though. Early cubist paintings I found very messy. Since I am a sucker for aesthetics I liked the depiction of atmospheric depth way too much to abandon it. Instead the notion grew in me that I could combine atmospheric depth, a nice feel for proportions and cubist styling. My task was to merge them into something I could dwell into and use it to form the world around me. This drawing is an early attempt of a man who was trying to pull his own hair way up to destinations unknown. Not too bad though, I sold it eventually after a couple of years.

Click here to read about the sale of this art work to an American collector through artfinder.com.