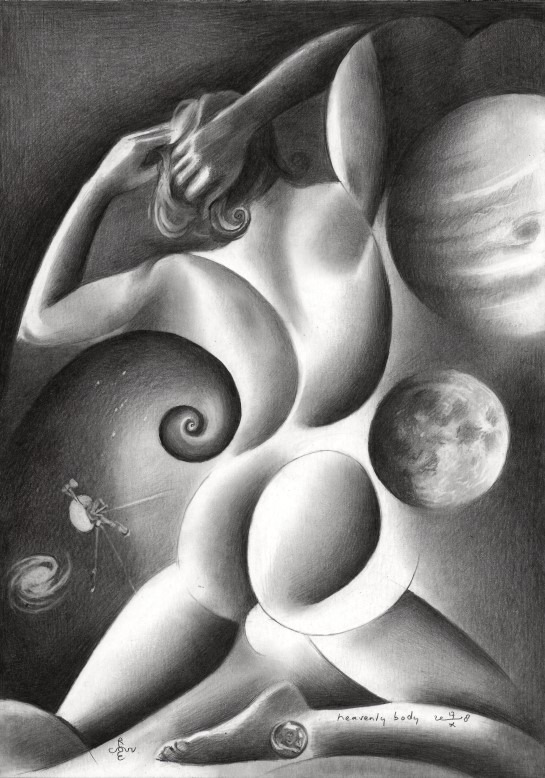 Buy a print of this artwork through iCanvas

Voyage across the Universe

I was going to name this drawing ‘Heavenly Body – 17-10-18’, ‘Across the Universe’ after the Beatles song but when I was completing the drawing I heared Madonna’s ‘Lucky Star’ and all of a sudden the lyrics ‘heavenly body’ popped out, hence the title. In this drawing I kept to my search for combining surrealism, realism, impressionism and cubsim. It’s also an ode to Voyager II that, so I read the other day, just has left our solar system. The first man made object to ever done so.

After my colored pencil drawing Holy Vortex! – 05-10-18 I returned to graphite again. Even though I like the rhythym of varying: sometimes in color, many times in black and white, I consider myself to be a tonal man. Maybe it is because of the simplicity of employing tonal scales. One gets maximum result like a fierce statement in a jiffy, without nifty color schemes to show off with. However, apparently but for no justifiable reason I see few exemplary ones in online galleries and on social media that I consider to be good from a tonal point of view. Must be something difficult for many but not for me. I sketched with graphite pencil for all my life.

The attracive model’s round buttocks were a feast to draw. They almost look like spheres. Hence my association with planetary spheres. One thing led to another and the Voyager presented itself as the icing on the cake. Finally, to show the infinite in everything it was not enough to show space but also the golden ratio: both the principle as a curve and the spiral of the Milky Way.

Click part 1, part 2 to read about the sale of two prints throug icanvas.com