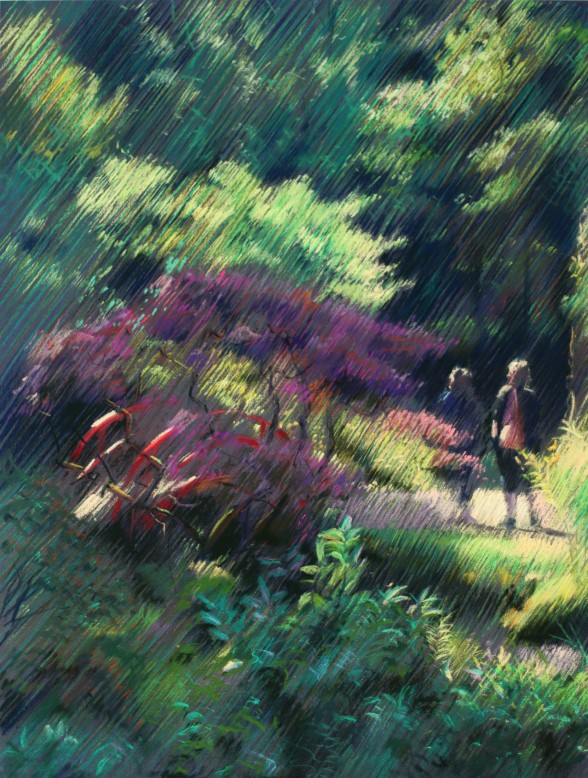 An impressionistic view on the Japanese Garden at estate ‘Clingendael’ at The Hague, Netherlands. Opened in spring and autumn only. Exemplary of my love for laying hatched strokes. I developed this technique after I visited the Musée d’Orsay at Paris, France where I saw the pastel drawings by Edgar Degas. Although he primarily hatched vertically, the principle merely stays the same.

Mine also was influenced by pointillism that brought forth divisionism. The latter is the theory on having colors blend into your eyes at a distance, rather than blending them out on canvas or paper. As a result reds and purples in this pastel blend in the green and yellow areas, whereas in the latter there are some red and purple strokes in order to grey the greens a little bit.

Throughout the years I saw a many of impressionsists in museums and gazed upon their skills on canvas in awe. For no particular reason Camille Pissarro comes to mind, whom I admire for his natural transitions between treescapes and negative spaces. I learned a lot from these artists. It caused me to develop a feel for so-called broken contour delineations in order to portray forms, especially needed in vegetation and nature in general.

As a consequency I played with this by sharpenng some contour delineations of leafs in the foreground and keep the leafs of the yellow tree and the trees behind it rather vague in order to create atmospheric depth. The red bridge, purple Japanese acer and two walking women with some reds in them serve as a central block in the middle, drawing the attention. Also the sunlight in the women and the shadows in the front and the back are conducive to that focus.